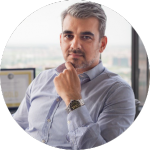 Dimitris Pergamalis is the Head of the Construction and Development at Globalworth.

He has more than 15 years of experience in project and construction management in Romania and abroad.

Dimitris has been involved in a number of landmark projects in Romania such as: Globalworth Tower (2nd tallest office tower in Romania), BOC office building (largest office building in Romania), Upground Towers residential complex, City Offices, Gara Herastrau and Globalworth Campus (under development). In addition, he has delivered fit-out works for over 150,000 sqm of office space on behalf of third party tenants.

Prior to his current position, Dimitris has held managerial positions at Dimand S.A. where he was involved in several major scale projects in Greece and Romania, including the Citibank Headquarters (Romania and Greece), Bancpost Headquarters (Romania) and several roll-out programs for corporates such as Citibank, Wind Telecommunications and Marfin Bank delivering +200 retail shops and branches in a number of cities in Greece.